Diosmin and hesperidin in supplementation

We probably all know which preparations will work best in the case of headache, abdominal pain, constipation or fever. When it comes to the treatment of hemorrhoids, we are not interested in the topic until the problem affects us personally. No wonder, after all, hemorrhoids are not talked about at all and honestly … Hardly anyone admits that they have any unpleasantness in this area – haemorrhoidal disease is (as if it were not) a very troublesome disease. Although every second person after the age of 30 is faced with it, it is still a taboo subject. 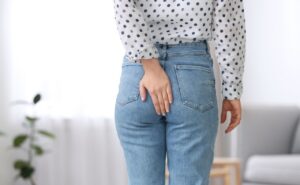 However, it is worth being aware that hemorrhoids (i.e. haemorrhoids) are a common problem that affects a huge part of society, so it is so important to be able to talk about it. A sedentary and inactive lifestyle, poor diet (causing frequent constipation), age, pregnancy, childbirth, obesity, exercise-related overload or mechanical injuries – these are the most common causes of haemorrhoids. So what can we do when we hear the diagnosis?

What will work in the treatment of hemorrhoids?

The most common methods of treatment include: local treatment (gels, ointments, suppositories), invasive (depending on the stage of the disease) and the use of tablet preparations – most often based on diosmin and hesperidin. What are these substances? Do they have a scientifically proven effect?

Diosmin is a naturally occurring flavonoid glycoside that can be isolated from various plants or obtained from the hesperidin flavonoid. For the first time, this substance was isolated in 1925 from the leaves of the Jerusalem artichoke. In 1969, it was used in medicine for the first time [1] . As one of the flavonoids, diosmin has a multidirectional biological effect, including hypoglycemic, anti-inflammatory and antioxidant effects. The indications for the use of diosmin are varicose veins of the lower extremities (resulting from chronic venous insufficiency) and hemorrhoids [2] .

There have been many studies that have confirmed the effectiveness of diosmin in the treatment of hemorrhoids. In one of them, Dr. Abdul-Wahed Meshikhes studied 105 patients with haemorrhoidal disease. Patients were treated with diosmin-based drug for 4 weeks. 23 patients with 1st degree hemorrhoids, 73 with 2nd degree hemorrhoids and 9 patients with 3rd degree hemorrhoids were included in the treatment. Significant improvement was noted in patients after treatment. It has been statistically proven that itching, pain and bleeding disappear and the proctological condition improves [3]. In another study, researchers investigated the effects of administering diosmin in acute hemorrhoidal conditions. The trial was carried out on 90 patients, of which the first group (49 patients) received diosmin, while the second group received placebo (41 patients). After 7 days of therapy, a significant reduction in symptoms: swelling, pain and bleeding was observed in the group receiving diosmin, compared to the group receiving placebo [4] . As confirmed by scientific reports, diosmin is an effective and safe substance, and importantly – due to its beneficial effect on vascular elasticity – it can be used with very good results in haemorrhoidal disease!

As for hesperidin (an equally popular and effective substance from the flavonoids group), it is most often found in lemons, oranges, grapefruits, limes and mandarins, and more specifically in the flesh and skins of the aforementioned fruits. Hesperidin has numerous properties, including sealing and making the walls of blood vessels more flexible. It is also a strong antioxidant (it eliminates harmful free radicals).

In the treatment of hemorrhoids, the combination of hesperidin with the above-discussed diosmin brings very good results. Numerous studies show that these substances have a protective effect on the walls of blood vessels. In turn, scientists T. Jean and MC Bodinier proved that diosmin in combination with hesperidin inhibited the synthesis of inflammation mediators (arachidonic acid), as well as the release of free radicals [5] .

Preparations based on diosmin and hesperidin are popular on the market due to their effectiveness and positive effect in the symptomatic treatment of haemorrhoids. Therefore, when the problem of hemorrhoids affects you or your loved ones, it is worth reaching for proven and tested means.

We use cookies, including for advertising, statistical and service purposes. If you do not change your device's settings, cookies will be saved in its memory. More information can be found in the Privacy Policy, where you can also check the rules of processing your personal data. Settings I Agree